THE PHENOMENA OF PAUL YGARTUA

The great sensuality and sheer inexhaustible power of imagination, the spectrum of YGARTUA’S work between abstraction and figuration–an innovative artist who has the ability to create and work on several different styled paintings simultaneously.

He is exceptionally prolific, from the beginning of his career, he displayed an interest in subject matter of every kind and demonstrates a great stylistic versatility that enables him to work in several mediums and techniques at the same time. 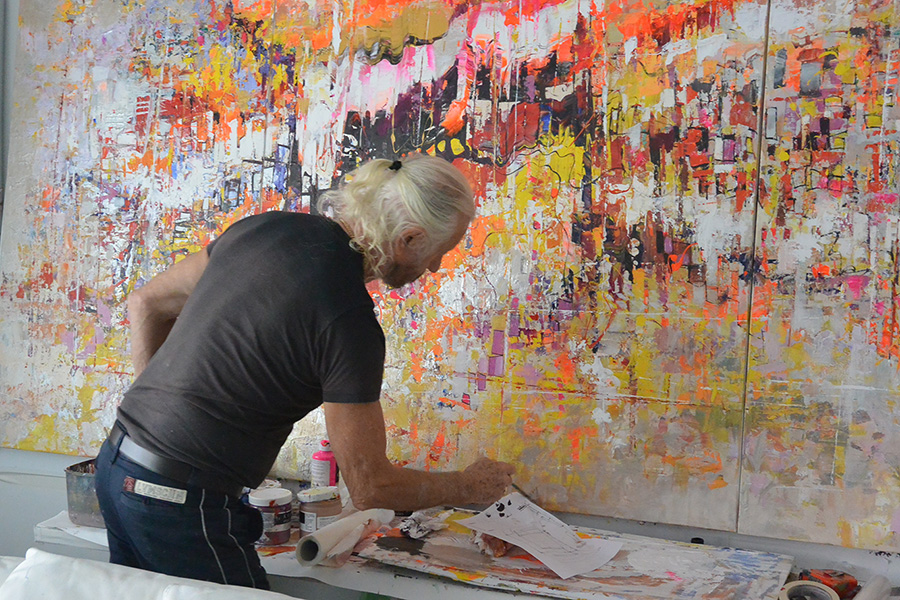 Creation and interpretation is Paul’s life. In painting he is at home in all mediums and prodigious. His styles include Realism, Expressionism, Abstract Expressionism, Post Modernism, Surrealism, Abstract Surrealism and Future Conceptualism, a revolutionary technique developed and created by Ygartua. His continuous study and work on techniques and painting mediums are apparent throughout his vast body of work. Paul Ygartua is an artist whose versatility is reflected in his work. He is among those who lives elsewhere than their birthplaces. He was born in 1945 in Bebington, Cheshire (Liverpool) England. After graduating from Faculty of Arts Industrial Design, Liverpool Art College in 1965 he immigrated to Vancouver, Canada. From then on painting became his whole existence.

Paul Ygartua is a painter and muralist with bases in Canada, France, Spain and England. He has single handedly painted some of the largest public space murals in Canada and the United States. His most famous works are his “Heritage Series” depicting North American Natives and other ethnic and cultural groups. He is renown world wide for his monumental murals. “The World United ” (100ftx25ft/3,048cmx762cm) being one of his most notorious, commissioned by the United Nations for the United Nations Pavilion at the World Expo 86 Vancouver and his largest to date “Legends of the Millennium”, over 9,000 square foot (24ftx390ft/731cmx11,872cm). The American website ASKART considers it probably the largest mural ever painted by a single artist. His most recent mural in 2013, United in History, commemorating the history of Denny Island and The Heiltsuk Nation, Bella Bella – Pauline Hilistis Waterfall and the Hereditary Chiefs of the Heiltsuk Nation, Bella Bella dubbed him The Mural Miracle Maker.

“If an artist only has one mode of expression, then he only needs one style”

Ygartua’s Eclectic Universe will you give you an opportunity to immerse yourself in the eclectic and multifaceted world of artist Paul Ygartua–to learn about the different techniques and the various styles experienced by the artist throughout his work.

He is complex in his imagination and his expression as is quite evident by the many styles and techniques that he has mastered and progressed over the last 40 years. A brief description of the art of Ygartua is virtually impossible.

A visionary with an acute sensual perception and a facility to express these dramatic emotions with a spontaneity that brings life and emotion to the subject. This takes on many forms and many directions. So to fill the needs of his deep and expressive imagination, he utilizes many techniques and styles. Some need fast spontaneous physical expression, other forms need more time and yet still capture the impulsive character of Ygartua.
The complexity and the individuality that is expressed throughout his works accounts for his constant change of city and country – being inspired by the world and the people around him.

Future Conceptualism is a reverse painted technique on transparent plexiglass, a technique similar to Cloisonne Enamelling, an ancient method of the Chinese, (whose history can date back to over 500 years) whereby a single line is etched out depicting the subject matter, then each area painted separately creating a collage of color in a mosaic effect.

This is a complex technique, conveying a powerful presence–a mixed media mosaic cubistic style inlaid with gold or silver, creating the design and separating the colors.It is a distortion of the subject matter, an original abstract with a sculptural effect. The element of lucidity is created through color separation combining florescent metallics, enamels and acrylics.

This medium I developed in 1986 and this style continued to evolve till the early 90’s. It is just recently, that I have re-entered the challenge of working with this extraordinary medium which allows me to experiment more with my design concepts creating an ultra modern effect. A medium where I can express my sense of design with the freedom of expression with a controlled freestyle.

To achieve certain colors it is a combination of a process of blending metallics, bright enamels and acrylic fluorescents –creating the texture cannot be created in any other medium, the masking and the layering creates the cloisonne effect. The intricacy and complexity of the design and texture is achieved through the process of the gold inlay separating the enamel and acrylic overlay–achieved through various processes of the layering of enamel and acrylics establishing a separation, creating the allure and elegance of a marbled texture.

The allure of the plexiglass is compelling , it captivates the viewer, as it is bold, expressive and unique The intensity of color, the subtleties of the use of the blending of metallics creates a reflective characteristic which changes in different lighting, a metamorphosis that beholds and mesmerizes the observer.